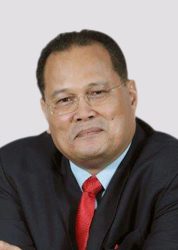 He first joined UPM in 1984 as an Administrative Officer and along the way, decided to switch to an academic career in 1994. He fully developed his academic career after completing his Ph.D in 1999, was promoted as an Associate Professor in 2003, and was raised to a full Professorship in 2006. In June 2009, he was selected to serve as a Special Advisor to the Minister of Higher Education Malaysia. His main duties include advising the Minister on the implementation of the Higher Education Transformation Plan, dealing with higher education institutions, and running the daily affairs of the Higher Education Minister’s office. He was then appointed as the Deputy Vice Chancellor (Academic and International) of the National Defence University of Malaysia from May 2010 until December 2011, and later as the Vice Chancellor of Universiti Malaysia Kelantan in January 2012. Before his term ended as a Vice Chancellor, the government decided to pull him back to the centre and lead a group of Professors as the first President and CEO of the National Council of Professors – an organisation that he helped conceptualise and establish.

He teaches graduate (MBA, M.Sc, and Ph.D), undergraduate (BBA, BHRD) and Executive Development Programs in the field of Organisation and Business Management, Organisation Development and Change, Human Resources Management, Industrial Relations, and Strategic Management. As a lecturer, Raduan has repeatedly been assessed to be excellent with an average score of 4.6/5 every year throughout his active teaching role. His primary area of expertise is the strategic management of human resources, and his special interests include Japanese style management, cross-cultural management, managing team effectiveness, and the design of human resource management systems to support business imperatives.

His book entitled “The Japanese-style Management Abroad: The Case of Malaysian Subsidiaries” has been widely circulated and is one of his major contributions. In addition, Prof. Datuk Dr. Raduan also served as an Editor-in-Chief for the International Journal of Workplace Management and a paper reviewer for many international and local journals.

Prof. Datuk Dr. Raduan has also been an effective and productive postgraduate supervisor. During his academic career, he has supervised, to successful completion, a total of 34 Doctoral students of which 28 he served as the Main Supervisor and 6 as a Supervisory Committee member, 25 Master of Science students as the Main Supervisor, and over 300 MBA projects. His supervisory skills have been extended internationally as well, by advising students from the University of Waseda, Japan, the University of Auckland, New Zealand, and the University of South Australia. Despite his busy schedule, he is currently supervising 8 Ph.D students at various stages. He has also been appointed as an external examiner to 18 Ph.D students and 12 Master of Science students from various institutions and has served as an assessor of promotion exercises (Professors and Associate Professors) for universities both locally and abroad.

His professional affiliations include the Malaysian Institute of Human Resource Management, the British Association of Human Resource Management, the Academy of Human Resource Development, and the Malaysian Institute of Management. His significant involvement in the corporate industry includes being on the Academic Advisory Board for a number of private and public Higher Education Institutions; a country representative for many international organisations including the Asia Pacific Economic Conference (APEC) HRDWG network; a member of the Board of Advisors of the Asian Regional of Training and Development Organization (ARTDO), the Global Federation of Competitiveness Council (GFCC), and the Global Science and Innovation Advisory Council (GSAIC). In addition, Prof. Datuk Dr. Raduan has had extensive consulting experiences with organisations of all sizes in a variety of areas, in Malaysia and countries such as Indonesia, Brunei, Sri Lanka, India, Pakistan, China, and UAE. He has conducted more than 200 in-house training programs, both in the public and private sectors, and has been invited as a guest speaker for several international conferences in the area of human capital development before CEOs, diplomats, and ministerial officers. Under the capacity of President and CEO of the National Professors Council, he also sits on many national committees in ministries and government agencies including INTAN, EPU, and MAMPU.

Prof. Datuk Dr. Raduan has also occupied several leadership roles, among which include President of Academic Associations, Universiti Putra Malaysia (PPAUPM), Pro-tem President of Malaysian Academic Staff Association Council (MAAC), Committee Member of Malaysian Academic Associations (MOVE), Chairman of Parent-Teachers Association, and President of Selangor Rugby Association (MAKSAK). He was awarded the Asian HRD Congress Award (Contributions to HR Community) for his outstanding contributions towards human capital development and received many other awards by Institutions of Higher Learning in Malaysia and the UK.