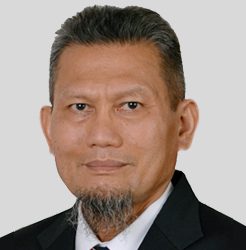 Prior to lecturing, from January 1997 to December 2011, he was actively managing companies involved in Civil Construction, ICT, Proton Car Dealership, Petrol Kiosk Operation, Consultancy, and Project Management businesses, whereby he was also the majority shareholder in these companies. He gradually relinquished his ownership and stewardship in the companies upon enrolling in the PhD program at INCEIF in January 2012.

From August 1985 to January 1996, upon graduating with a Bachelor of Economics (major in Business Administration), he joined Kwong Yik Bank Bhd (KYBB, Maybank subsidiary) as a management trainee. He was promoted to Assistant Branch Manager and later to Branch Manager, in 1990 and 1992, respectively. In 1993, he was one of few Branch Managers within the Maybank Group selected to launch and operate dual banking systems, Conventional and Islamic Banking. He resigned from KYBB in January 1996 to pursue his entrepreneurship ambition.

His vast experience in the business, banking, and lecturing fields is a valuable asset to both PBS and its postgraduate students.