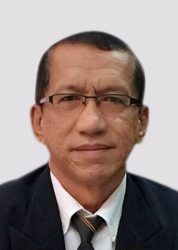 Associate Professor Dr Abu Sofian Yaacob received his BSc (Finance) from the Southern Illinois University and his MBA in International Trade from the Laredo State University (now known as Texas A&M International University), United States of America and his PhD in Accounting from the Hull University, United Kingdom.

Before joining UMK he was with Universiti Putra Malaysia (UPM) and prior to that he was with the Malaysian Inland Revenue Board (MIRB). He has held a few academic and non-academic posts while serving in UPM and UMK.